This blog comes from an answer from How to put the legend out of the plot. Reprint it here for note. Original author keeps all the right.

A legend is positioned inside the bounding box of the axes using the loc argument to plt.legend.
E.g. loc="upper right" places the legend in the upper right corner of the bounding box, which by default extents from (0,0) to (1,1) in axes coordinates (or in bounding box notation (x0,y0, width, height)=(0,0,1,1)).

To place the legend outside of the axes bounding box, one may specify a tuple (x0,y0) of axes coordinates of the lower left corner of the legend.

However, a more versatile approach would be to manually specify the bounding box into which the legend should be placed, using the bbox_to_anchor argument. One can restrict oneself to supply only the (x0,y0) part of the bbox. This creates a zero span box, out of which the legend will expand in the direction given by the loc argument. E.g.

places the legend outside the axes, such that the upper left corner of the legend is at position (1.04,1) in axes coordinates.

Further examples are given below, where additionally the interplay between different arguments like mode and ncols are shown. 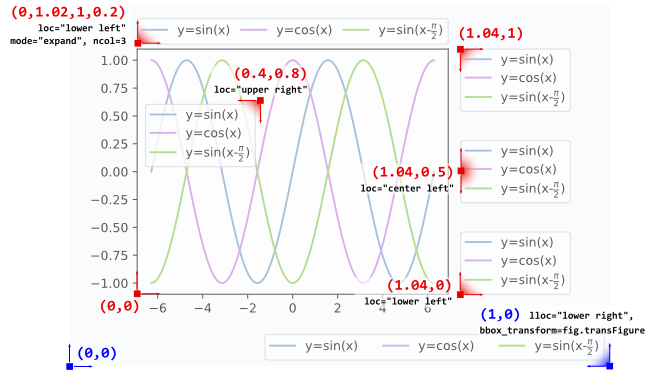 Details about how to interpret the 4-tuple argument to bbox_to_anchor, as in l4, can be found in this question. The mode="expand" expands the legend horizontally inside the bounding box given by the 4-tuple. For a vertically expanded legend, see this question.

Sometimes it may be useful to specify the bounding box in figure coordinates instead of axes coordinates. This is shown in the example l5 from above, where the bbox_transform argument is used to put the legend in the lower left corner of the figure.

Having placed the legend outside the axes often leads to the undesired situation that it is completely or partially outside the figure canvas.

Solutions to this problem are:

leaves 30% space on the right-hand side of the figure, where one could place the legend.

Comparison between the cases discussed above: 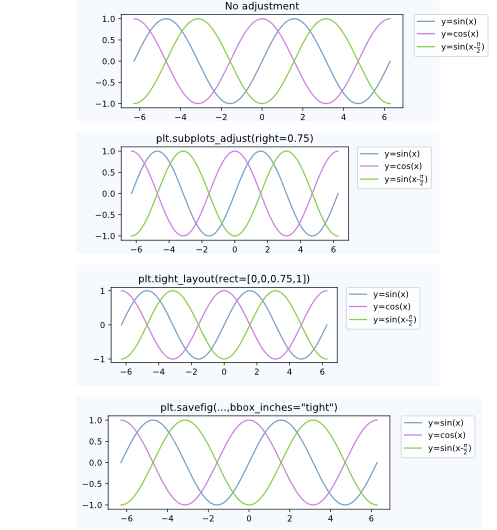 One may use a legend to the figure instead of the axes, matplotlib.figure.Figure.legend. This has become especially useful for matplotlib version >=2.1, where no special arguments are needed

to create a legend for all artists in the different axes of the figure. The legend is placed using the loc argument, similar to how it is placed inside an axes, but in reference to the whole figure - hence it will be outside the axes somewhat automatically. What remains is to adjust the subplots such that there is no overlap between the legend and the axes. Here the point “Adjust the subplot parameters” from above will be helpful. An example:

Legend inside dedicated subplot axes
An alternative to using bbox_to_anchor would be to place the legend in its dedicated subplot axes (lax). Since the legend subplot should be smaller than the plot, we may use gridspec_kw={"width_ratios":[4,1]} at axes creation. We can hide the axes lax.axis("off") but still put a legend in. The legend handles and labels need to obtained from the real plot via h,l = ax.get_legend_handles_labels(), and can then be supplied to the legend in the lax subplot, lax.legend(h,l). A complete example is below.

This produces a plot, which is visually pretty similar to the plot from above:

We could also use the first axes to place the legend, but use the bbox_transform of the legend axes,

In this approach, we do not need to obtain the legend handles externally, but we need to specify the bbox_to_anchor argument.