The repository cloned from GitHub pytorch/pytorch is different from the package we download using pip install or conda install. In fact, the former contains many C/C++ based files, which consist of the basic of Pytorch, while the latter is more concise and contains compiled libraries and dll files instead.

Here, let’s discuss the release version, or the installed package at first. The package has a lot of components, Here I only pick out some most important parts to do explanation.

All deep learning layers’ python entrance are located here. They mainly collect parameters from init input and do some modification to the input data. After that it will send core computation operation together with parameters into torch._C based functions.

Contains a series of base functions which serves for back propagation. Also, if you dig in, the core implementation is still from C libraries. Variable wrap is also put here, but now it is just omitted because of the merge of tensor and Variable.

Mainly these parts are contained in cuda folder: Stream, Event, Broadcast and Random.

torch.optim is a package implementing various optimization algorithms. Most commonly used methods are already supported, like adam, sgd and adagrad.

The torch.onnx module contains functions to export models into the ONNX IR format. These models can be loaded with the ONNX library and then converted to models which run on other deep learning frameworks.

Most basic tensor class defined here. It inherit a super class from C lib, called torch._C._TensorBase . And it attaches a lot of method like register_hook,resize, norm to tensor class. All these method eventually call C based libraries.

The library where compiled C/C++ files located. There are .dll files as well as .lib files. According to the bug reports on google, I believe .dll files are specially compiled for the compatibility of windows and .lib can be used in linux and some of them are also usable in Windows.(If you find a more accurate explanation, please tell me:) These files included: _C.lib, c10.lib, torch.lib, c10_cuda.lib.

Functions related to tensor operation are all located here. In fact, again, they are wrappers of functions from C libraries. You can find functions like tensordot, unique, split in this file.

All kinds of utilities codes are located here. This include dataset related code dataloader.py, dataset.py, sampler.py, also include save and output related checkpoint.py. Some TensorBoard support can also be found here.

How Pytorch manage its inner resource

In mathematics, a tensor is an algebraic object that describes a linear mapping from one set of algebraic objects to another. Objects that tensors may map between include, but are not limited to, vectors and scalars, and, recursively, even other tensors. The tensor is the central data structure in PyTorch. It’s an n-dimensional data structure containing some sort of scalar type, e.g., floats, ints, et cetera. We can think of a tensor as consisting of some data, and then some metadata describing the size of the tensor, the type of the elements in contains (dtype), what device the tensor lives on (CPU memory, CUDA memory)

TH library is responsible for the computation,storage and memory management of Tensor. It divide the “Tensor” into two separate parts: Storage and Access/View.

Storage: THStorage. It manage the way of storing the Tensor. 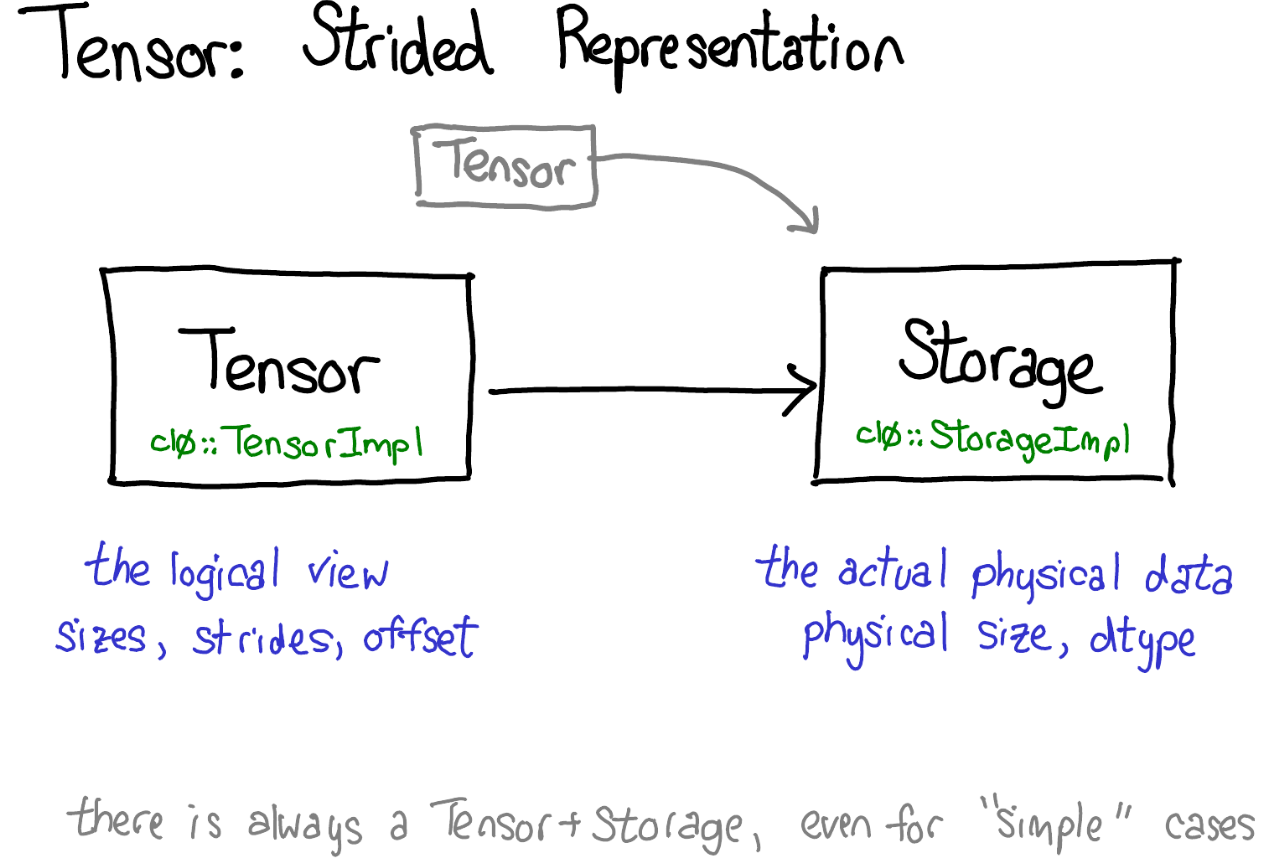 The allocate function is directly included from head file memory.

It is hard and not straightforward enough to understand stride and storage offset, so let’s borrow some images from ezyang, who is supposed to be an inner developer of Pytorch, to elaborate this problem.

A tensor is a mathematical concept. But to represent it on our computers, we have to define some sort of physical representation for them. The most common representation is to lay out each element of the tensor contiguously in memory (that’s where the term contiguous comes from), writing out each row to memory.

Please notice the relationship of sizes and strides. If we get a tensor with a size of (D,H,W) and this tensor is directly defined by user rather than a slice or result of some operation, the stride of it will be (H*W, W, 1). You can compare and draw a conclusion yourself. Each stride element in a certain dimension will be the product of all the following dimensions, and the stride of the last dimension will be 1.

Physically, stride means how many blocks of memory computer need to skip to get to the starting position of the next corresponding dimension. And if we use a formula to compute the memory position of a $Tensor[i,j,k]$, it will be $storageOffset + i * stride[0] + j * stride[1] + k * stride[2]$.

In the example image above, I’ve specified that the tensor contains 32-bit integers, so you can see that each integer lies in a physical address, each offset four bytes from each other. To remember what the actual dimensions of the tensor are, we have to also record what the sizes are as extra metadata.

Then comes to the memory offset. What does this mean? As we has mentioned before, a tensor storage may support multiple tensor view, and if we sliced the first N elements, then we will start from N+1 memory position. The following examples will give a further explanation.

You can see in the left example, we start at the third element block, so that means we skip two block, and here the offset is 2. Because of the slice, the two dimensional tensor becomes one dimensional tensor, and conjoint elements are continuous in physical storage, this means the strides is [1]. Size is the number of elements in this case and it is 2.

In the right example, conjoint elements are not continuous, but it do start from the beginning, so the strides is [2] and offset is 0. There are still two elements in total so the sizes don’t change.

What’s more, if you still find it somehow difficult to understand, you may try this website to playing with these parameters and see the dynamic process.

As we know, although in Python, you can use any type of data as you wish, as the interpreter will take care of the rest of the things. However, since the basic kernels are written in C/C++, functions from Python need to be dispatched into same functions with different input and device type. To a C/C++ functions, a certain function cannot take in int and float Tensor as a same X at the same time, they need separate implementation. 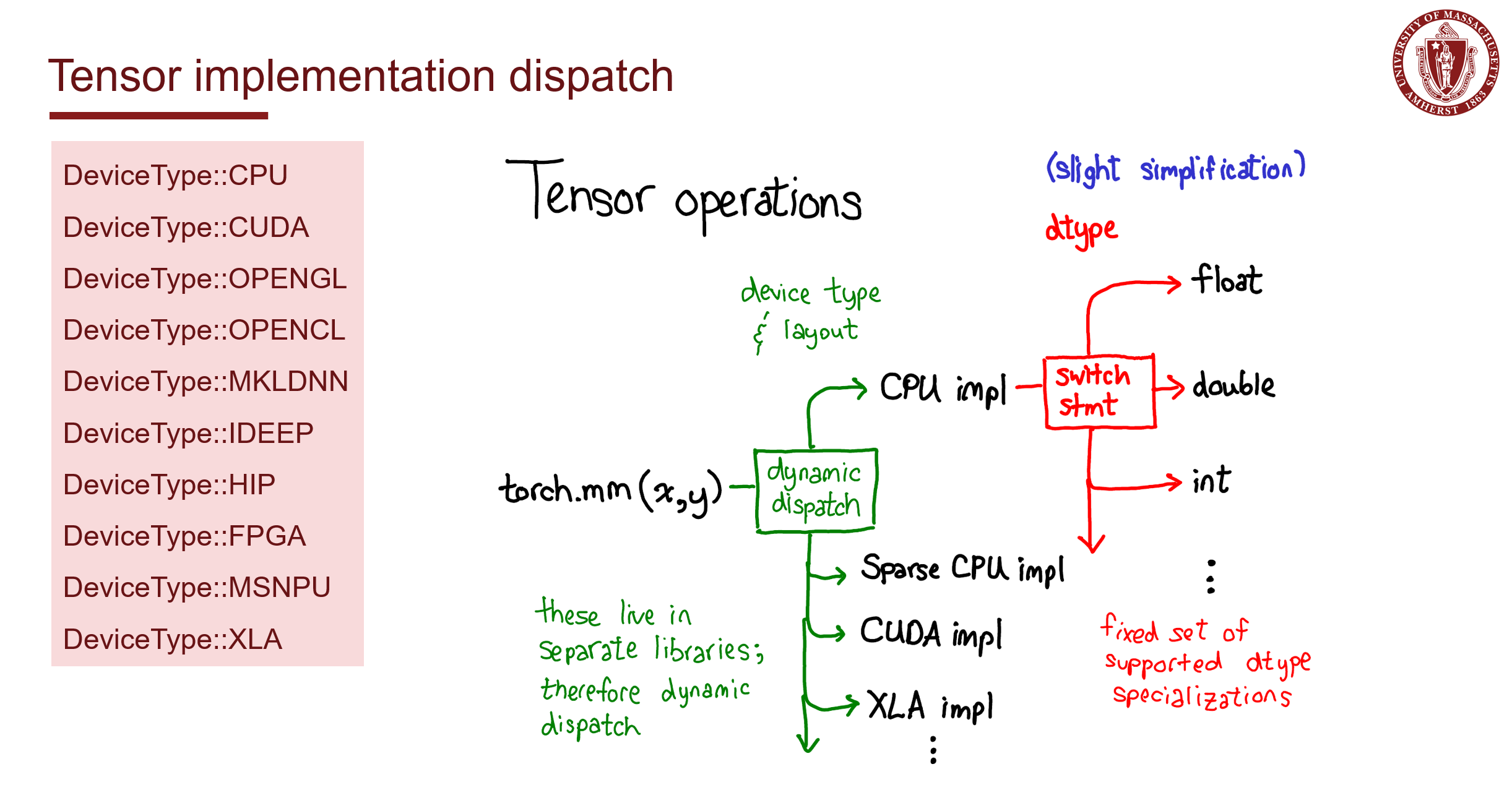 As we discussed above, the basic C/C++ implementation need to dispatch according to data and device type. But in code, how to actually do this work? 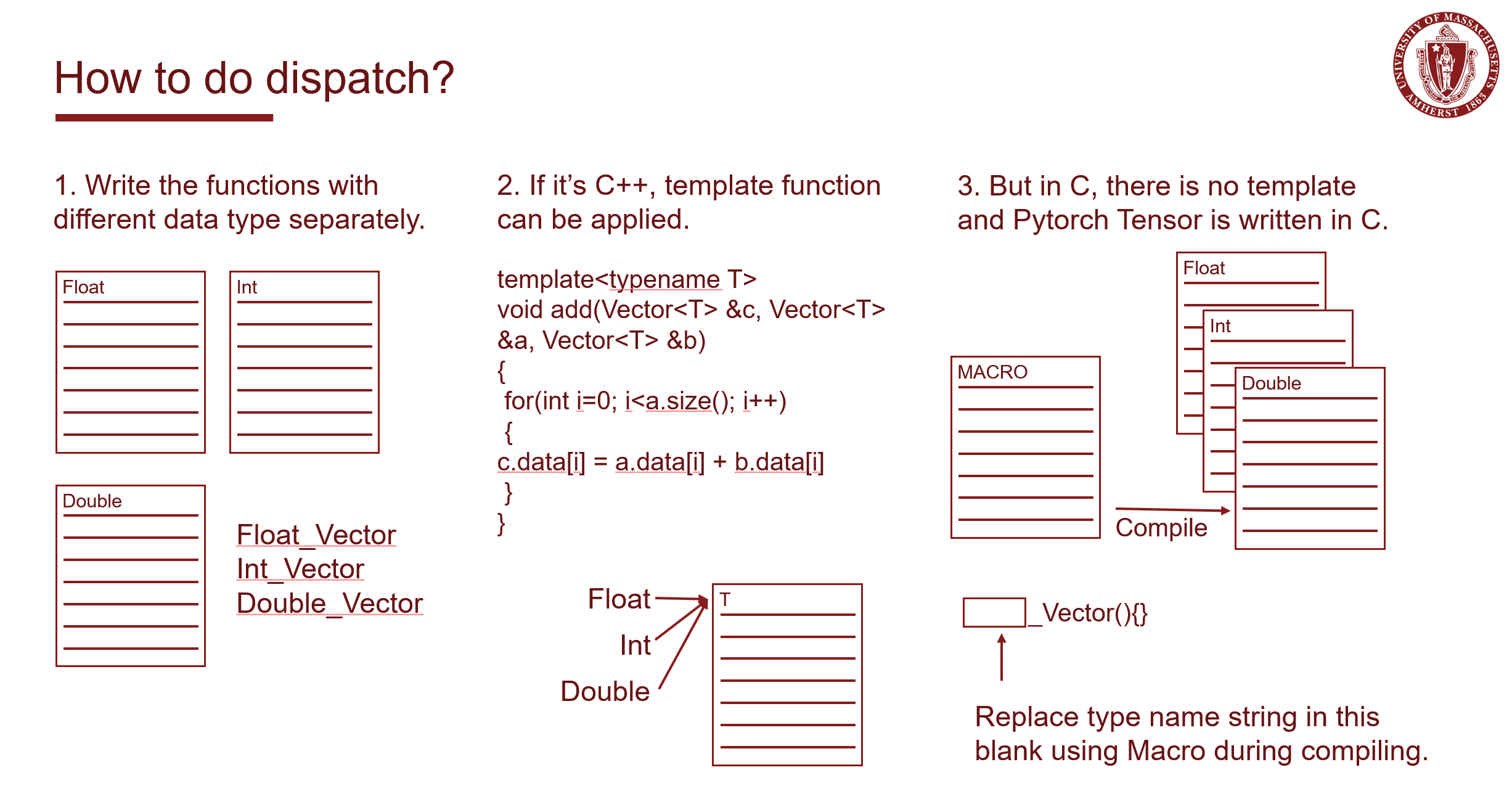 There are basically three methods.

I try to find the definition of THStorage, since it will give us a brief understand of the file management structure of pytorch, and we can also grab a basic idea of how those macros and includes are forming this huge project. We start from torch/csrc/Storage.cpp, and check step by step to the file included.

Find the macro definition in TH/generic/THStorage.h:

Find the structure definition in c10/core/StorageImpl.h:

And also some macro definitions:

Take THStorage_(newWithSize) function as an example, look into TH/generic/THStorage.cpp and we can find the definition:

We will only traced here and this show a representative example of how pytorch inner code call and implement those method.

Autograd is a method which support automatic computation of gradient which will be used in the back propagation. Autograd depend directly on the computational graph. Computational graph is used for defining the pipeline of a model. It combines functions with variables and shows how they connect to each other.

A directed graph with the following property:

Pytorch, on the other hand, utilize dynamic graph. The structure of the graph is established at the same time as the forward, so there is no need to use placeholder.

Here is an example inner code of autograd. 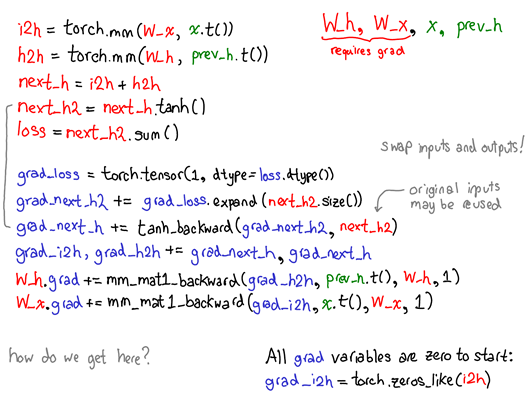 Here we will elaborate these parameters which get involved in this process. 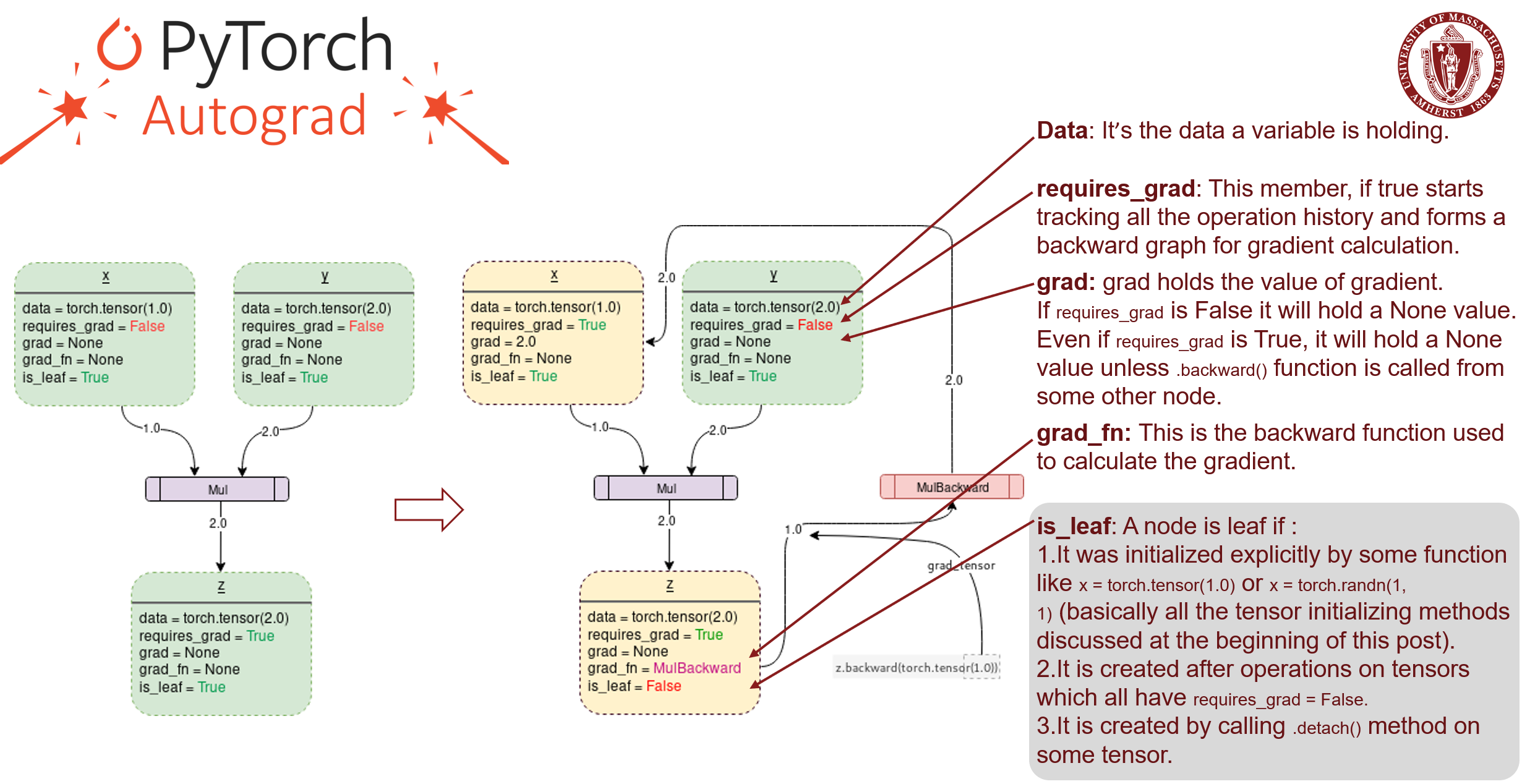 Since different data type, different devices are supported, and python code call C/C++ based code, the source code structure is not easy to understand. Here is the most important parts in the root directory. 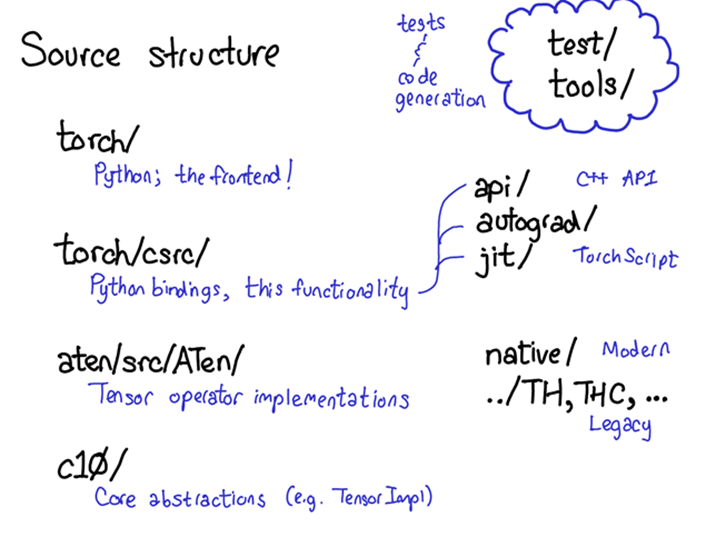 And provide a more detailed directory comment as well as explanation below. 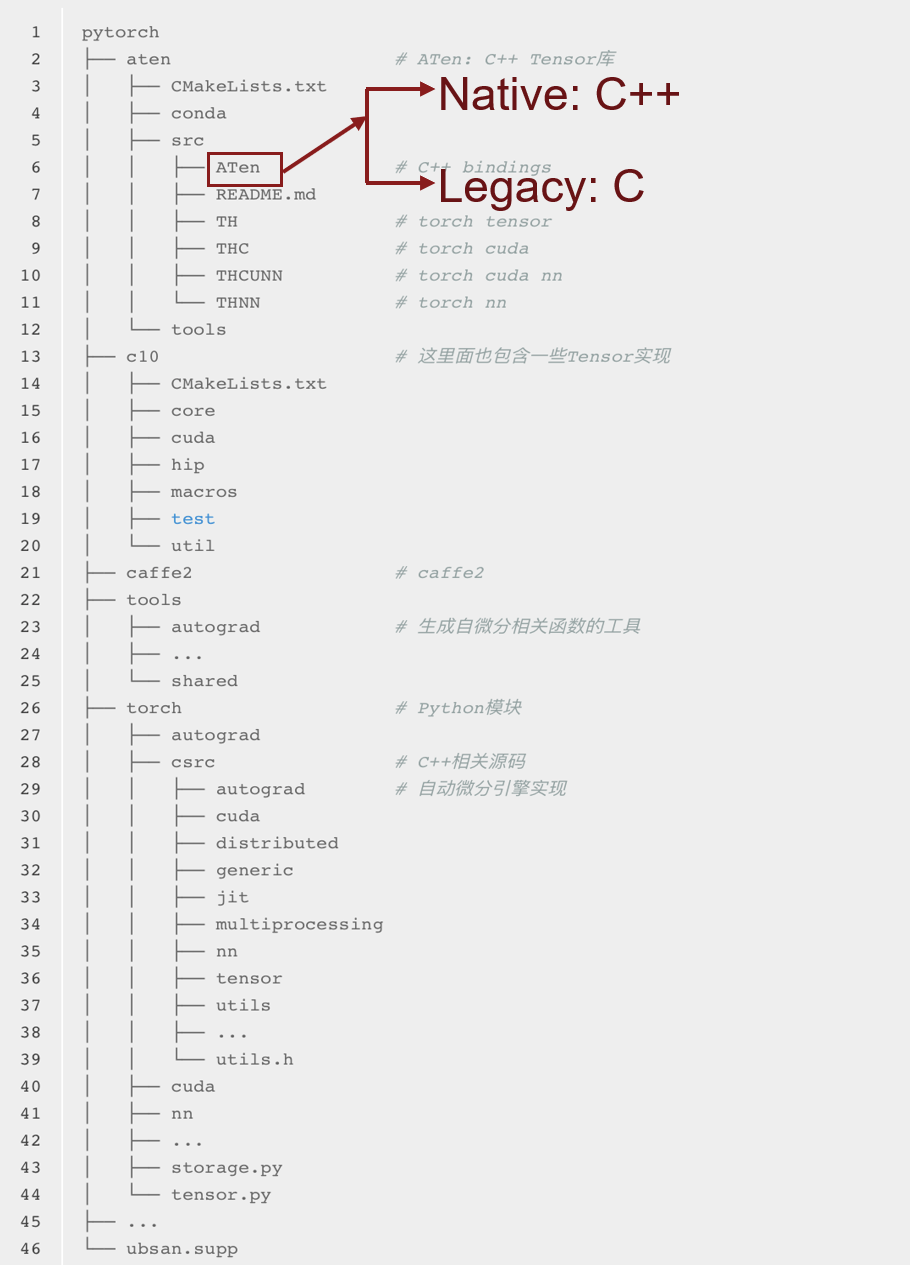 Caffe Tensor Library: Most basic tensor library. Codes here can be deployed to mobile devices as well as servers. It contains the core abstractions of PyTorch, including the actual implementations of the Tensor and Storage data structures.

A TENsor library for C++11, the C++ tensor library for Pytorch. It is a C++ library that implements the operations of Tensors. If you’re looking for where some kernel code lives, chances are it’s in ATen. ATen itself bifurcates into two neighborhoods of operators: the “native” operators, which are modern, C++ implementations of operators, and the “legacy” operators (TH, THC, THNN, THCUNN), which are legacy, C implementations. The legacy operators are the bad part of town; try not to spend too much time there if you can.

This part is from the original Caffe2. After the merge of Pytorch and Caffe2, Caffe2 become a kind of backend in Pytorch.

This is the part normally called by user when then use Pytorch to train or test their models. It contains what you are most familiar with: the actual Python modules that you import and use.

The C++ code that implements what you might call the frontend of PyTorch. In more descriptive terms, it implements the binding code that translates between the Python and C++ universe, and also some pretty important pieces of PyTorch, like the autograd engine and the JIT compiler. It also contains the C++ frontend code.

Mechanism inside a simple call 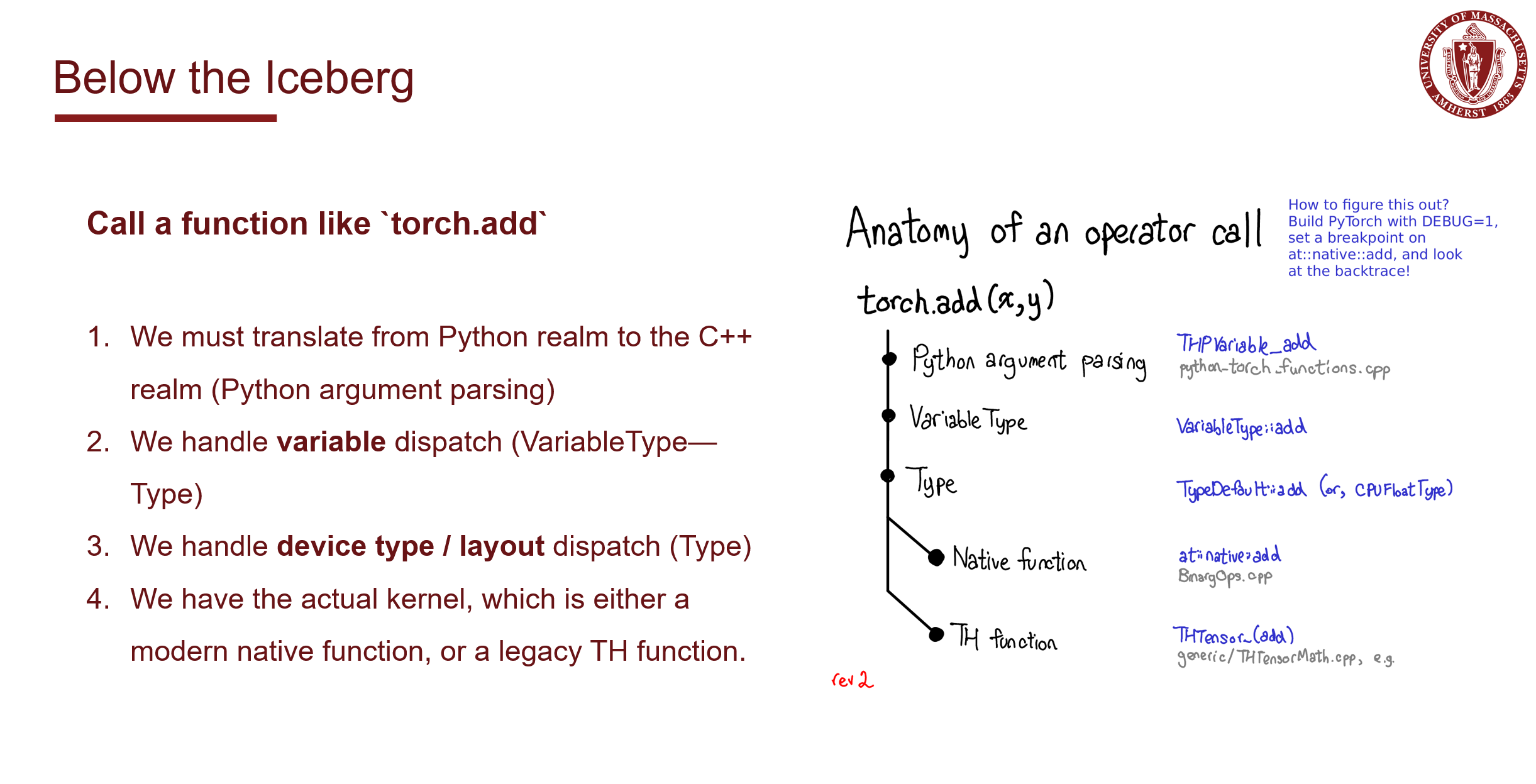 How Python interact with C/C++

Compile C program to .so library and call it in python

If this is a C++ file, you need to expose the function you want to use in a extern "C" wrapper.

Afterwards, thing in Python code are similar as those in C.

C++ file include module and Expose

A C++ Function can be exposed to Python by writing a Boost.Python wrapper:

That’s it. We’re done. We can now build this as a shared library. The resulting DLL is now visible to Python. Here’s a sample Python session:

Integrating a C++/CUDA Operation with PyTorch

Besides integrate C++ file in python and use it in Pytorch, Pytorch itself provides us with two quite straightforward way to finish this job. They are Building with setuptools and JIT Compiling Extensions.

For the “ahead of time” flavor, we build our C++ extension by writing a setup.py script that uses setuptools to compile our C++ code. For the LLTM, it looks as simple as this:

The JIT compilation mechanism provides you with a way of compiling and loading your extensions on the fly by calling a simple function in PyTorch’s API called torch.utils.cpp_extension.load(). For the LLTM, this would look as simple as this:

Integration of our CUDA-enabled op with PyTorch is again very straightforward. If you want to write a setup.py script, it could look like this:

Instead of CppExtension(), we now use CUDAExtension(). We can just specify the .cu file along with the .cpp files – the library takes care of all the hassle this entails for you. The JIT mechanism is even simpler: